We got the mini king cakes coming out this morning come get ya suuuum! Remember we open till 5:00pm

We got the mini king cakes coming out this morning come get ya suuuum! Remember we open till 5:00pm 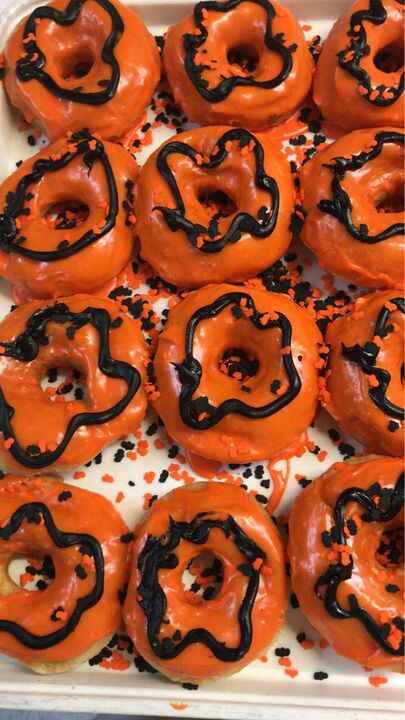 Party squares are in the house!

Party squares are in the house!

Come get ya ghosts,cats and vampire teeth !

Come get ya ghosts,cats and vampire teeth !

We are open today Monday for Labor Day till 11:00am thanks and have a safe holiday!

We will be open Monday for Memorial Day just a heads up to everyone ! Thanks and be safe!!

We are back open this morning, come get ya suuuum! Sugah Rush in Plaquemine open as well our phone lines are down but we are open at both locations!!!!

Sales and customer service and cleaning !

Sales and customer service and cleaning !

Still selling king cakes all week !! Come see us we also have ooey gooie and party squares and muffins and brownies etc...

Guess who’s back!! Lil sweet in the house!!!

Guess who’s back!! Lil sweet in the house!!!

We have sweet potatoe,coconut,pecan pies small and large come get ya suuum! We also keep our Sugah Rush party squares available !!! Come in or call at 225-344-7242 to make your orders for Thanksgiving !!

Order yours beginning tomorrow April 21
We are open 4 AM to Noon Daily!!!!

We have FRESH chocolate Cake squares too!

We even have Chocolate Cake squares

For our Red Velvet Bunnies with Cream Cheese Icing
$17.99

Share this Post and Tag Sugah Rush AND You are entered into our weekly Bunny Cake Giveaway!!!!!

Remember you can order your cakes from Port Allen Bakery or Sugah Rush 225-238-2050 and either pick them up at both places!

Americans usher in the new year with diets and lifestyle resolutions galore, but many people across the globe — particularly those from predominantly Catholic countries — celebrate the calendar change with a sweet pastry known as king cake. It first appears in bakery cases at the beginning of each year and can be found at the center of celebrations through early spring. Some associate it with Mardi Gras, others with a celebration known as Epiphany.

King cake is eaten on January 6 in honor of Epiphany, or Twelfth Night, which historically marks the arrival of the three wise men/kings in Bethlehem who delivered gifts to the baby Jesus. (The plastic baby hidden inside king cakes today is a nod to this story.) King cake also appears on tables throughout the Carnival season, which runs from Epiphany to Fat Tuesday (the day before Ash Wednesday and the start of Lent), at which point practitioners typically abstain from such indulgences as cake.

The pastry goes by different names around the world, and comes in varying shapes and styles. Here now, an exploration of the history of this baked good, the traditions surrounding it, and a brief look at king cakes across the globe.

What is king cake?
A sweet, circular pastry, cake, or bread that is the centerpiece of a historically Catholic celebration known as Epiphany, which falls on January 6. Today it takes on many different forms and is found at a variety of similar celebrations with religious origins. Most Americans are likely familiar with Louisiana-style king cakes that consist of a cake-y bread dough twisted into a ring and decorated with colored icing and sprinkles. Variants can be made from cake batter or bread dough or pastry, but almost all versions are shaped into a circle or oval to mimic the appearance of a king’s crown.

Every king cake contains a trinket — often a small figurine in the shape of a baby — which plays a crucial part in the celebration of the holiday that inspired this pastry. Whomever finds the trinket in their slice of cake gets to be the “king” for a day.

Where did it originate?
King cake is said to have originated in Old World France and Spain and came to be associated with Epiphany during the Middle Ages. When it was brought to the New World (along with Catholicism and Christianity), the tradition evolved further.

In New Orleans, king cake and Mardi Gras go hand in hand: The cakes can be found starting in early January and are available up until Ash Wednesday and the start of Lent. The symbolic bean or baby baked (or embedded) into the king cake is important to Mardi Gras celebrations because the person who gets the piece containing the baby must host the next year’s celebration.

How is it made?
To make it, sweet dough is twisted into a round and sometimes adorned with colored sugar doughs before being baked. Some versions are split and then filled with cream or fruit; others are topped with candied fruit, icing, and colored sugar. Louisiana-style king cake is almost always decorated in the colors associated with Mardi Gras: green, gold, and purple (representing faith, power, and justice).

Why is there a plastic baby inside my king cake?
king cake baby

While there’s a long history of hiding trinkets inside king cakes, the modern tradition of a small plastic baby started in New Orleans. A commercial bakery called McKenzie's popularized the baby trinket that was baked into cakes back in the 1950s; they were originally made of porcelain but later swapped out for an easier-to-find plastic version. These days the plastic baby figurine is typically sold along with the already-baked cake and hidden by the purchaser, rather than coming baked inside (due to concerns about eating something that’s been baked around a piece of plastic).

The baby inside the king cake is such an important tradition that each year during Carnival, the New Orleans’ NBA team unveils a seasonal King Cake Baby mascot (which is absolutely terrifying, by the way).

In France, galette des rois translates literally as “cake of kings,” and is a flaky pastry cake made from puff pastry that is typically filled with a frangipane almond cream (or occasionally fruit or chocolate). A decorative pattern is scored into the top of it before baking, and sometimes the finished cake is topped with a paper crown. Traditionally, there is a “fève,” or bean, hidden inside.

The king cakes of New Orleans more closely resemble those of Spanish-speaking countries rather than the king cake that originated in France.

Merry Christmas and Happy New Year from the crew at PAB!!!

Share Video to be entered into our Halloween Cake Giveaway!

Welcome back to Instagram. Sign in to check out what your friends, family & interests have been capturing & sharing around the world.

Happy Tuesday!
OUR phones are Currently NOT working. If you want to PLACE a cake order.... PLEASE message Sugah Rush HERE and LEAVE YOUR PHONE NUMBER, and a Member of our STAFF will call you directly....

Be the first to know and let us send you an email when Port Allen Bakery posts news and promotions. Your email address will not be used for any other purpose, and you can unsubscribe at any time.

Other Bakeries in Port Allen

Whoever made Donuts this morning 11/6 needs to be fired. Worst Donuts ever got from there.
Thank you to our SugarFest2021 Sponsors! Atchafalaya National Heritage Area Alma Plantation Arts Council of Greater Baton Rouge Progressive Tractor Fannie Easterly Harry L. Laws, Inc. Joby Beaud Keep West Baton Rouge Beautiful Louisiana Division of the Arts Louisiana Nursery Block and Bridle Club at LSU LSU AgCenter Sugar Research Station West Baton Rouge Convention & Visitors Bureau West Baton Rouge Fire Depatment West Baton Rouge Garden and Civic Club West Baton Rouge Historical Association West Baton Rouge Library West Baton Rouge Parks & Recreation West Baton Rouge Parish Sheriff's Office Thank you to our SugarFest2021 Donors! Bergeron's Boudin and Cajun Meats The Chop Shop Deer Processing Court Street Cafe Cou-Yon's Cajun Bar-B-Q Hubben's Supermarket The Poboy House Port Allen Bakery
Get King Cakes on the Westside at spots like Port Allen Bakery! WestBatonRouge.net/Dining #westbatonrouge #feedyoursoul
A HUGE shout out to Teddy Champagne and his AWESOME staff! If you haven't stopped in to try the best of everything on the planet, you don't know what you are missing. Mine are the Jalapeno and Cheese Kolachies. No one does them better. Always a pleasure to see everyone and keep doing what you do so well. -Major Rougon
Is there any product that can be shipped from your bakery to Tn. ? It might be a while before my next trip to Louisiana. You come HIGHLY recommended by my friend, John Schneider. Any traditional Louisiana Christmas bakery items?
Open this morning?
Appreciate y’all not charging me extra for the roach in my boudin kolache this morning.