Only empty bread bags this week, sorry —I’m taking the week off to visit with family. See you next Wednesday, August 10!

It’s my husband’s birthday, so I only made a small batch of bread today (July 22). Grab yours at Delmonicos Heritage Meats and the Eastside Olympia Food Coop. Sorry, but no deliveries to the Westside Coop today. Have a great weekend!

On store shelves today is the new Wild Yeast Honey Oat Sourdough sandwich loaf! Made from organic grains and wild yeast, it’s flavorful, long lasting and easy to slice. Look for it at Delmonico’s and both Olympia Food Coops.

On store shelves today is the new Wild Yeast Honey Oat Sourdough sandwich loaf! Made from organic grains and wild yeast, it’s flavorful, long lasting and easy to slice. Look for it at Delmonico’s and both Olympia Food Coops.

I'm so excited to be working with Jami at Olympia's historic Sherwood Press on new baguette labels and other materials for WYB! If you don't already know about this local treasure, you can learn more about it here: https://thesherwoodpress.wordpress.com/, and here: https://olympiahistory.org/sherwood-press/

We're now delivering to the Olympia Food Coops earlier. Wednesdays and Fridays it’s between 1 and 2 pm. On Thursdays it’s between Noon and 1 pm. If you want to make sure you get a loaf, please order online at wildyeastbreads.com for pickup at Delmonico's. Because of the volume of calls the Coops have been getting, please do not call them to try to reserve bread. Thanks!

Our website is up! Go to wildyeastbreads.com to order bread.

Bialys are back! Well, our riff on a bialy anyway. We start with wild yeast bagel dough, flatten into mini pizzas, slather those with grilled onions, poppyseeds and caraway seeds, and top everything with Swiss cheese and Parmigiano. Available Wednesday thru Friday after 1 pm only at Delmonico’s.

Bread now available Wednesdays! Delivering afternoons Wednesday thru Friday to both Olympia Coops and Delmonico’s Heritage Butcher. Website coming soon (wildyeastbreads.com). Thanks for sticking with us through the delivery and preorder transition!

Changes are coming to WYB! Soon you’ll be able to order bread on my website, wildyeastbreads.com, and pick it up from our friends at Delmonico’s Heritage Butcher. New delivery days: Wednesday thru Friday. New delivery times: between 3 and 4 pm. Also I’m now selling only through Delmonico’s and the Olympia Food Coops. No deliveries this week as I finish transitioning to preorders. Finally, regrettably, I’ve had to raise prices for the first time ever. Deliveries start again Wednesday, February 9. Thanks for your continued support as I move in a new direction!

Love the snow! But the ice not so much. WYB will be delivering to the usual locations except Spuds II Tumwater on Thursday and Friday, December 30 & 31, barring any unforeseen weather. Stay safe and warm and stock up for the weekend! Hello everyone! Next week, Wild Yeast Breads will be on a holiday schedule, delivering bread Tuesday and Wednesday (but not Thursday or Friday) for your holiday table. In addition to my traditional loaves, I’ll be making Salted Rosemary (my classic sourdough levain with fresh rosemary and a sprinkle of sea salt) and Raisin Walnut Wheat. Sourdough Challah in the festive crown shape will be available Wednesday only. Limited supplies at both Olympia Food Coops, Spuds at Wildwood and Ralph’s Thriftway. For your convenience, Delmonico’s Heritage Butcher is taking preorders. Enjoy!

Hello! Just want everyone to know I’m taking next week off. That means no bread from Thursday, November 11 thru Sunday, November 14. Regular deliveries will resume Thursday, November 18.
Also, to everyone who loves to bake bread or maybe just eat bread, I’m looking to hire a part time baker. I need someone with lots of energy and enthusiasm, and I’m happy to train. If you or anyone you know might be interested, please email me a statement of interest at [email protected]. Thanks!

Challah is waiting for you today at Delmonico’s, both Olympia Food Coops, Ralph’s Thriftway and Spud’s Produce at Wildwood. Plain and Poppy available.

WYB is back at the Sidewalk Cafe!
We will be delivering as usual this weekend, September 9-12. I’m not baking next Thursday and Friday to do some long term planning for the bakery. That means no WYB deliveries September 16 and 17. So it’s a good time to stock up. Frozen bread can be thawed at room temperature, then just popped in a hot oven for a few minutes to crisp the crust.

Hey everyone. I was under the weather and not feeling well enough to prep bread for Thursday. Sorry, but no WYB bread tomorrow, September 2. I’m all better now and prepping for Friday’s deliveries. 🤗

Toasted Sesame Wheat dough ready for pre-shaping. And my niece is in town! Normal deliveries today (Sunday), then I’m off next Thursday and Friday, with deliveries again Saturday, August 28.

Last week a birthday, this week Mt. Rainier! Summer is short and I’m taking off today, July 29, and next Thursday, August 5. Otherwise, deliveries as usual. Hope you’re enjoying the summer too! 💜

Sorry for the short notice, but WYB will be closed on Thursday, July 22 to celebrate a family birthday. Regular deliveries the rest of the week. Thanks!

My usual custom bags are temporarily unavailable because of supply chain issues, so you will see these bags on the shelves for awhile. The same WYB bread inside!

Wild Yeast Bread is back in the stores today. I’ll be delivering thru Sunday, June 20, but I’ll be out of town again next week, this time for my father’s 90th birthday celebration!

Happy Memorial Day weekend! Bread is on the shelves all weekend at our new, later time. Deliveries are happening between 11 and Noon. Stock up because I’ll be away starting June 3 for my daughter’s college graduation 🎈🎈🎈Bread will be back Thursday, June 17.
Thanks!

Oops, I realized both Coops are closed tomorrow, Saturday, May 1, after I prepped my bread dough! So my husband is going to sell bread near the Eastside Coop parking lot from around 11 to noon tomorrow (or until bread runs out). Look for the handsome silver-haired man and a silver Prius.☺️ The wonderful people at Delmonico’s will help pick up the slack and sell extra as well.

Hello! Sorry to report I have a broken oven and won’t be delivering tomorrow, Thursday April 29. The oven was supposed to be fixed in time to bake Friday, but the part I need is now delayed until Monday 🤯 I’ve got one working oven and am going to get as much bread out the door Friday thru Sunday as possible, but it may mean slightly later delivery times. It also means I can’t make the sourdough challah this weekend, since it bakes at a significantly lower temp than my other breads. Hope to be back on track next week 🤞

Sorry, no bread tomorrow (Thursday April 22). Back as usual on Friday.
Thanks for everyone’s support about my need to take a break and rethink things ❤️ I’ve got a couple of ideas brewing. One is to shift my schedule to start work at 4:30 am instead of 2:30. (Just writing that drains some tension from my shoulders, ha ha.) This would mean my deliveries wouldn’t start until midday. The other idea is to add an online site to preorder bread with pick ups at Delmonico’s Heritage Butcher on 4th Avenue. This would ensure you get the bread you want and also give me more flexibility. Please let me know what you think about preordering!

I’m taking next week off! After years of solo baking, with no plan other than to make the best bread I can for the most people, it’s starting to feel unsustainable. Since I don’t have time during my baking weeks to think about the future, I’m taking time off to reflect and plan. Delivering today (Sunday) and then back at the usual locations on Thursday, April 15. Thanks for your understanding!❤️

Be the first to know and let us send you an email when Wild Yeast Breads posts news and promotions. Your email address will not be used for any other purpose, and you can unsubscribe at any time. 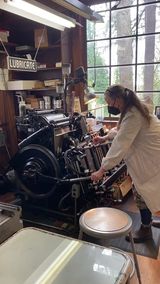 I'm so excited to be working with Jami at Olympia's historic Sherwood Press on new baguette labels and other materials for WYB! If you don't already know about this local treasure, you can learn more about it here: https://thesherwoodpress.wordpress.com/, and here: https://olympiahistory.org/sherwood-press/ 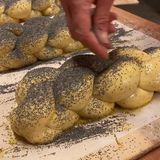 Challah is waiting for you today at Delmonico’s, both Olympia Food Coops, Ralph’s Thriftway and Spud’s Produce at Wildwood. Plain and Poppy available. 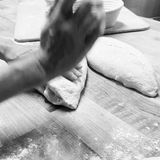 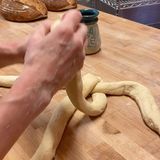 Braiding challah before the final proof and bake in a 425 degree oven. Available with or without poppy seeds on Fridays at Ralph’s Thriftway and Spuds Produce, and Saturdays and Sundays at Delmonicos Heritage Butcher. #localbusiness #supportsmallbusiness #supportlocal #sourdough #artisanbread #organicfood #challah #wildyeastbread 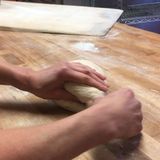 Sorry everyone, no bread deliveries next week. I will be visiting my family in Ohio. Fresh bread at the usual places tomorrow (Saturday the 18th) and Sunday. Thanks! 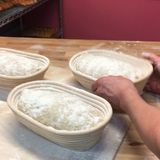 New York Rye on its way to the oven. My rye is made with organic flour and makes great deli-style sandwiches. 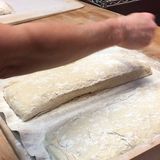 Getting ready to load the ciabatta. It is now available at the Eastside Coop and Spuds Produce on Sundays, and also Fridays at Ralph’s Thriftway. If you try it, please me know what you think! 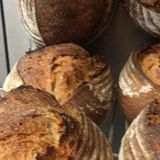 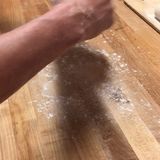 Hello everyone. I am starting a new baking schedule today, now delivering Thursdays through Sundays at all the usual locations. For the new Sunday deliveries, you will find the following: Olympia Seafood will have Baguettes, Country Levain, Rye and Focaccia. Ralph’s Thriftway will have Baguettes, Rye, Country Levain and Toasted Sesame Wheat. The Eastside Coop will have Baguettes, Rye and Toasted Sesame Wheat. I’ll start delivering to Spuds on Sundays too, but that selection TBD. Thanks for your support! #wildyeast #organicbread #sourdough #artisanbread #olympiabakery #baguette #ryebread

Thanks for your interest in Wild Yeast Breads, a traditional artisan bakery started in 2015. I create delicious, healthful breads using the best ingredients, including Central Milling organic flour. I mix and shape the breads by hand, using traditional methods and wild yeast (sour dough) starter when appropriate. All my doughs (except the rye) go through long, slow fermentation to improve the flavor and quality.

I deliver bread fresh from my imported French deck ovens between 10 and 11 am Tuesdays-Saturdays. My outlets are Olympia Seafood, Spuds Produce, the Eastside Coop and Yelm Coop.

And here is a link to a profile of Wild Yeast Breads from The Olympian: https://www.theolympian.com/news/business/article182393416.html

Other Wholesale Bakeries in Olympia

Delicious Wild Yeast Breads now at both Co-op locations!
Wild Yeast Breads
I bought a loaf of your rye bread from Delmonaco's to make some pastrami sandwiches. It was the best rye bread I have had in a long time. The pastrami sandwiches were delicious.
I had some rye toast with butter and honey for breakfast with a fried egg. Wonderful.
For lunch I melted some swiss cheese on some toasted rye bread.
I have to get another loaf soon.
When and where can I find your incredible bread with olives?
Hi - do you have any Rye out somewhere? Time for a Reuben with all this corned beef!
I was lucky enough to stumble upon a WYB baguette at Co-op west. It was the best baguette I've ever had. This bread is wildly delicious! Thank you!
Any chance you'll have a spot in Lacey? I love your bread but Oly is out of my way ( I live in Hawks Prarie ) Keep doing what you're doing it's delicious.
Your sesame pita bread was a delicious accompaniment to Merry Wives of Windsor!
Great rye bread
Best bread in town.
I'm eating your New York rye right now. Love this bread!
Dear WYB - what days & locations for focaccia?
Is your challah available at Spud's every Friday?
Where to pick up a baguette today? Thx
x

Other Wholesale Bakeries in Olympia (show all)