📸credits to Off The Leash

Come see us at the Space Coast Beer Fest!

🍺Only 3 weeks to go until the First Annual Space Coast 🚀 Brew Fest!!! We are so excited to have this awesome lineup of Breweries for our Inaugural event, plus live music from Western Atlantic Band, many food trucks to choose from, and craft vendors to get a jump on that Christmas shopping!
Bring your doggies and get them a treat at Beer Mutts while you enjoy your tasty beverages and food!🐶
Tickets on sale now!
https://www.eventbrite.com/e/space-coast-brew-fest-tickets-382430438737

In case the Ian heads our way it is good to be prepared. One thing you can do if you are worried where your pup will go potty during the storm is to get some sod from lowes, ace, or Home Depot. If they are sold out pull it up from your yard like I did a couple years ago. Put the sod in a kiddie pool with a stick especially for boy dogs who need to mark. Then place the kiddie pool in your garage, patio, or bathroom. Most dogs will hold it during the storm if you take them out right before the heavy rain but just in case you have a puppy or older dog.

𝑻𝒉𝒆 𝑫𝒐𝒖𝒈 𝑫𝒂𝒚𝒔 𝒐𝒇 𝑺𝒖𝒎𝒎𝒆𝒓 𝒂𝒓𝒆 𝑯𝒆𝒓𝒆! 🐾
Catch Doug modeling his best Summer wear around the brewery for the month of June. He is a big fan of our Beer Mutts dog treats and loves a good Vacationer Coconut Blond (𝒋𝒖𝒔𝒕 𝒕𝒂𝒑𝒑𝒆𝒅!) after a long day of swimming.

If you didn’t already know, we are very dog friendly to friendly dogs here at Transport Brewery. We also love kids and a good food truck, too! If you’re in the area today, come hang out with us.

It’s been a fun and windy day at the Lions Club Festival. More fun tomorrow!

Pup can't wait for the next event? Beer Mutts treats are located in stores too! 🐾🐕

Our treats are made with lots of love and simple, natural ingredients! No additives, fillers, preservatives, artificial flavors, or anything you can’t pronounce.

Introducing the new Beer Mutts in cans. They were a huge hit at the FBG festival in Tampa. Next up is the Hogtown Beer Festival in Gainesville and the Lions Club Festival in St Augustine.

We love Veterans United Brewery for their commitment to Veterans and love of dogs!

Beer Mutts dog treats are available for your beloved doggy in various flavors in the VU Taproom!

They are made from spent grain from local breweries!

We’re pup friendly 🐕
Did you know? All of our outside dinning areas are pet friendly. Dogs must be well behaved and remain on a leash at all times. We also have locally made Beer Mutts dog treats available in our retail area. Only the best for our Wicked pups!

Kai and Ashe contemplating life. Kai still says the Beach Life is for me. Life is Good!!

What is that? Kai, the Quality Contol Officer At Two Tides Brewing in Savannah

Beer Mutts is in the #1 spot at the Oviedo Night market this evening.

How can you resist a girl who wants to pick her own treats? At the Hops and Vines home brew event in Apopka. Fox Valley Hop Farm.

There’s just over a week left to get your votes in right meow for our Cover Pet Contest to vote for which doggo or kitty cat you want to see on the cans of our Paws Pale Ale and Whiskers Wheat beers. 🐶🐱

The top 3 dogs and the top 3 cats with the most votes will be finalists and one grand prize winning cat and dog will be chosen by a panel of expert judges to have their furry faces become can-art! All finalists will win prize packs from First Magnitude, a Humane Society NCFL] swag bag and more! The winners will will be announced at Woofstock on Thursday, November 4th!

It is still a tight race, so it’s really anyone’s game and even if your pet doesn’t win, you’re still raising money for an amazing organization! Each vote is a $1 donation to The Humane Society of North Central Florida.

Thank you so much to everyone who nominated their pets, we had a whopping 249 entries and with your help, we have already raised OVER $22,000 for The Humane Society of North Central Florida.

To vote, head to bit.ly/FMCoverPet (link in bio) and for more information about Woodstock and to find out how to get tickets, visit Humane Society NCFL]

This is perfect ♥️

The dog version must say “pick up after your human.”

May 8: St. Augustine Craft Brewers’ Fest at the Fountain of Youth

Stop in and visit at the Beer Mutts tent!

St. Augustine’s second annual Brewers’ Festival will be held from 1 to 6 p.m. Saturday, May 8, 20201 at the beautiful Fountain of Youth Archeological Park, 11 Magnolia Ave. The festival will include free tastings from 20+ regional breweries, local food trucks, face painting and live music; all w...

Check out Veterans United tonight with your fur babies!

We have BEER MUTTS dog treats available for your beloved doggy in various flavors in the taproom!

They are made from spent grain! 🍺

Santa checking out Beer Mutts for Rudolf and the team.

Don’t forget about the doggos
•
We’ve got dog treats made with lots of love and our spent grain from the brewery.
•
•
•
Cheers🐶🍻

Kai worked the Pier Farmers Market in between beach breaks

To our friends who purchase Beer Mutts at the St Augustine Seafood Festival, please note that it is cancelled. Beer Mutts can be purchased at Old Coast Ales Brewery, anytime. While it’s a financial hit for us it’s even more for the charities of the Lions Club. We support their difficult decisions during these unusual times.

Be the first to know and let us send you an email when Beer Mutts posts news and promotions. Your email address will not be used for any other purpose, and you can unsubscribe at any time.

Send a message to Beer Mutts: 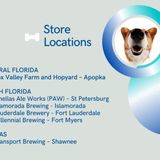 How crazy is this!

My son’s first brewery in Jacksonville Beach, Fl. opened its doors in June 2011. One day while we were discussing remaining true to local resources and sustainability, the idea to make dog treats using spent grain came about. The grand-dogs liked them so much we began giving the treats to visiting dogs in the brewery. The demand grew as dogs began expecting a treat along with their owner’s beer and thus, Beer Mutts was born. Today, Beer Mutts are still made in small batches in my kitchen using only natural ingredients. Every batch must meet the approval of Kai, the 4-legged quality control officer and the newest grand-dog Ashe, Kai’s assistant.

Other Bakeries in Gainesville

Moonrise in palm coast needs more bags since I just bought them out. Just letting you know.
We’re pup friendly 🐕
Did you know? All of our outside dinning areas are pet friendly. Dogs must be well behaved and remain on a leash at all times. We also have locally made Beer Mutts dog treats available in our retail area. Only the best for our Wicked pups!
Will hug for beer mutts
We open at 12PM and MIKE is ready and waitin' to make your VU BREW Sunday FUN-day as FUN-tastic as it can be!

Hang out, get a FLIGHT, stay for a PINT, play some FUN board GAMES and ENJOY each other's COMPANY and watch some SPORTS on the telly! ️

It's Sunday FUN-day as it's Gimme Mo-Pils on Sundays

It's a VU Brew "MIMOSA" with our PILSNER!

Grab a PINT, get some 6-PACKS, or fill some GROWLERS or CROWLERS TO-GO !!!

BEER is freshest at the SOURCE and we BREW and CAN onsite!

Do you want some of our cool VU BREW STUFF?

Or are you on the hunt for beer-related gifts for a friend, loved one, or heck, even for yourself?

ASK your BARTENDER and check out VU Brew Merchandise & SWAG to see what we GOT!

*No online store at this time*

Send us those pictures of !

See Where do you VU Brew? for details or ASK your BARTENDER!

XFL, NBA and NCAA games this weekend - ALL for YOU!

It's Dog Biscuit Day - so pick up a bag of Beer Mutts dog treats - but don't forget about your other critters!

Farmers do quite a bit for us - especially for beer!
They grow hops, the grains that are malted and so much more!

We utilize those farm products either for food directly or in things like VU Brew production and Beer Mutts!

In the VU Brew Circle of Life, the spent grains go BACK to the farm to feed the livestock! 🐖🐃🐂🐐

Thank you FARMERS for all that you do! 🍻

Lady Birds new favor treats!
All ready to go for Mills 50 District Pup Crawl and Dog Day Afternoon at the brewery! We have Poodle and Pooch Rescue of Florida, Beer Mutts Dog Treat, Wise Images Photography LLC. taking photos, Vinny & Kory Pho on Wheels for lunch, and Layla Brisbois from 1:00pm - 4:00pm. Sunday Funday with the pups! @ Ivanhoe Park Brewing Company
It's ROONEY's BIRTHDAY! Our official unofficial beer garden greeter turned 1 today and we're throwing him a bash! Join us tonight at Halpatter for Rooney-Palooza. We will be releasing our next Limited Edition bottle: Big Roon Barleywine, Beer Mutts will be there with their spent grain dog treats, Double Six Service Dogs will hold a demonstration at 6pm and will have therapy dogs for you to love on, Jason Dicks and Steel Tumbleweed will be on the Garden Stage, and Fenced In BBQ will have all the nom-noms! 22oz bottles of Big Roon Barleywine will sell for $15 each with $2 being donated to the Lake City Humane Society!
de
x

Other Bakeries in Gainesville (show all)